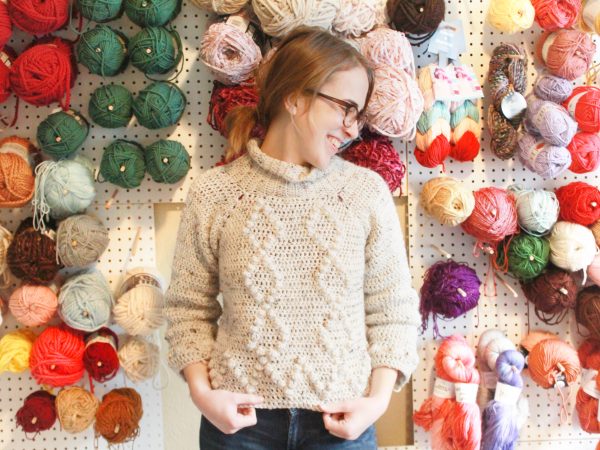 It’s here! The very first episode of the E’Claire Makery Podcast is finally here! I am so excited about it and can hardly believe it. If you’ve followed me on Instagram you’ll have heard me talk about wanting to do a video podcast on my Youtube channel. I recently became obsessed with podcasts, and while listening to them I thought, “Hey, I think I could do this, and have it geared towards makers.” I’ve found it so hard to know how to navigate through all of the different aspects of being a maker from the business side of things, to getting a following on Instagram, to knowing how to promote your patterns, it has been a road of hard work and learning as I go. I wanted to create something where other makers could come together as we learn from those who have gone before us.

Enter in, the E’Claire Makery Podcast! The goal of the podcast is to have other makers share their maker journeys that they have taken and any of their tips from a wide range of maker related topics. I have a ton of awesome makers coming onto the podcast that you aren’t going to want to miss! Each episode will be live on my Youtube channel, and will have a corresponding blog post that details the same things talked about in the video podcast if you’re more of a reader. The very first episode of the podcast is where I share my maker journey of how I’ve gotten to where I am today! I’d like to share it with you here today on the blog as well.

(The rest of the post may be sponsored or contain affiliate links, which means I may receive a small commission, at no cost to you, if you make a purchase through a link. See my full affiliate disclosure here.)﻿

I first learned how to crochet when I was seven years old, on a cold winter’s night on my grandma’s couch. My Grandma gathered all of the young cousins, including myself, onto the couch to teach us all how to crochet. Our young selves had no idea what crocheting was, and despite that my grandma handed us each a crochet hook and some yarn. She then started showing us how to chain stitch, and as soon as I did that I was hooked on it. (Pun totally intended, hehe.) I was amazed as before my eyes the yarn was turning into something else. How was it even possible? That fascination and curiosity began my long time love of fiber arts.

Soon after that night at my Grandma’s, I decided that I wanted to learn more about how to crochet. I asked my mom if she could teach me, and she ended up helping me learn more beyond the basics. That then led to me wanting to also learn how to knit, and I made my very own scarf. From then on I continued to learn more and more about crocheting and knitting. I got a book on amigurumi when I was around 12 years old, and taught myself, with the help of youtube, how to make my very own amigurumi dog. Let’s just say that it didn’t turn out exactly as the picture depicted it, haha. Instead of a round face, it had more of a long oval, and a really dorky smile on it.

Despite that failure at making amigurumi, I didn’t let that stop me! I continued to work my way through the amigurumi book, because I wanted to be able to make my own plushies. As I grew better at making amigurumi, I decided that I was old enough (13 years old) and had a relative amount of experience to try my hand at designing. My very first design was a little cake with whip cream and chocolate on top. After making that design, I knew then that I wanted to be a crochet designer. I loved the idea of creating designs that people could use to make their very own crochet creations, and getting to do that as a full time job. I started branching out into more designs such as making some lego Star Wars inspired characters. I even began to look into how I could start my very own Etsy store.

Check out some of my favorite Amigurumi Designs:

However, all of my dreams of becoming a designer came to a screeching halt when I was in high school. During my junior year of high school I began showing signs of chronic acid reflux. At first my doctor thought that it could be fixed with some medication and a change to my diet. I started taking the medication, but my body wanted none of it. Every time we would try a new acid reflux medication, my body would accept it for a short time and then reject it. My chronic acid reflux soon developed into the most intense burning sensation in my chest that felt like a hole was burning through my esophagus, and I became pretty much completely bedridden. I was in such constant pain that I could barely get out of my bed, and I became a pain filled hermit that watched Netflix all day long laying in bed and hoping that the pain would stop. The only other thing I could do besides watch tv was crocheting or knitting. During the time that my doctor was trying to figure out how to help me, I knitted an entire blanket and crocheted a bunch of amigurumi. I prayed constantly for some way to make the pain stop, because going through the amount of pain I was in was the hardest thing I’ve ever done. After about a year of trying to figure things out, my doctor decided that I qualified for a laparoscopic Nissan fundoplication surgery, which would fix the acid reflux by reinforcing my esophagus.

Some of my Favorite Maker Tools

The surgery ended up helping with the acid reflux, but it brought about a whole new set of stomach problems. When you have the surgery that I had, your body is getting a whole new anatomy, which I learned that the body doesn’t like it one bit. I soon developed more chronic stomach pain that was different than acid reflux, and my doctors were constantly astounded and confused about what it was. I tried going on restrictive food diets, different homeopathic remedies, and still I was left in bed. My dream of being a crochet designer slowly was fading away as I lay in bed trying to not focus on my pain too much. I soon stopped crocheting and knitting because doing them didn’t seem worth it amidst the pain I was in.

In case you missed it, catch the full episode here:

After almost a year of trying to figure out what was wrong with me, I started losing too much weight, and my parents decided that it was time to take me to a specialist and settled on going to the Mayo Clinic in Minnesota. Let me tell you, that place is amazing! Within a few days they were able to run all of the tests they needed to on me that would normally take 6 months to do all of them. The doctors there were able to rule out my condition being a lot of things, and were able to figure out that it was a chronic pain syndrome known as Central Sensitization Syndrome (CSS). By having CSS, that means that my body’s nerve endings are over firing , which makes my nerves 10 times more sensitive than other peoples. That means that my body registers almost everything as pain. I never know when a wave of pain is going to hit, but after a time I’ve been able to figure out how to live with it. I started exercising and being able to start living a relatively normal life.

Despite starting to live a relatively normal life, I didn’t think that my dreams could actually come true, but that changed when I started dating my now husband, Stephen. He saw all of the creativity that I had, and he encouraged me to start designing and using my fiber arts skills again. Soon I began designing cross stitch patterns, which led me to start following designers on Instagram and eventually some of those designers began to include crochet designers. I was so inspired seeing what they were doing that I decided that it was about time that I pick up my crochet hooks and yarn again. Once I did that, there was no going back. I needed to pursue it. As I shared my hopes with Stephen, he kept encouraging me to start my blog and business. I honestly would have never started it if not for him. He encouraged me so much, and he constantly supports me.

Now here I am today! I’ve started my crochet design business, began designing patterns again, have met so many wonderful people on Instagram, and have been able to have opportunities I never dreamed of. Who would have thought that I would be featured on two major crochet blogs this last year, have two yarn companies sponsor me for different things, and get the chance to start my own video podcast. I absolutely love what I do, and would have never dreamed that it would be possible a few years ago. The girl who sat in her bed in intense pain wouldn’t have dreamed she’d be here today.

I want to encourage you if you also struggle with chronic pain or feel as if you could never start pursuing your dream. It is possible! If you work hard, keep trying, and never give up you can pursue something that you’d never dream of doing. Your hopes are worth it even if you might feel that they are not! You can do it maker! I believe in you!

I hope that my story has helped encourage you in some way, and that it will inspire you to follow your dreams! I can’t wait to share more maker stories with you through my podcast, and help you rock it in your crafty ventures this year. Let’s be friends and grow together!

Save it for later!

Have you been looking at crochet designers who design clothes, and wondering how they do…

With spring and summer approaching quickly, it’s time for some of my favorite…

Hi, maker! My name is Claire Goodale, the designer and yarn addict behind E'Claire Makery. I love creating and sharing crochet designs that help you make the handmade items of your dreams!

E’Claire Makery is a member of the Amazon Affiliate Program. As an associate I earn a small commission from qualifying purchases.